Download full A Siamese Embassy Lost In Africa 1686 Book or read online anytime anywhere, Available in PDF, ePub and Kindle. Click Get Books and find your favorite books in the online library. Create free account to access unlimited books, fast download and ads free! We cannot guarantee that book is in the library. READ as many books as you like (Personal use).

A Siamese Embassy Lost in Africa 1686

Synopsis : A Siamese Embassy Lost in Africa 1686 written by Guy Tachard, published by Treasures from the Past which was released on 1999. Download A Siamese Embassy Lost in Africa 1686 Books now! Available in PDF, EPUB, Mobi Format. A Siamese Embassy Lost in Africa 1686 The Odyssey of Ok-khun Chamnan This long-forgotten tale of the shipwreck off the coasts of Africa of a Siamese embassy to Lisbon in 1686 lay buried in the text of a French book printed three hundred ... -- "Ok-khun Chamnan, during his odyssey as part of the aborted embassy to Portugal, spent nearly a year in Goa, where he learnt Portuguese; a month travelling overland from Cape Agulhas, the southernmost tip of Africa, to the Cape of Good Hope; four months at the Dutch settlement at the Cape; six months in Batavia; and several months at sea on this journey. On his return to Siam in 1687 he was ordered to greet the French envoys La Loubere and Ceberet soon after their arrival." "The adventures of this Siamese khunnang did not end with his unsuccessful journey to Lisbon. He went on to Europe in 1688, visited the Riviera and Rome in winter, met the pope, and then in 1689 had an audience with Louis XIV. He converted to Catholicism and returned from Europe in 1690, disembarking at Balassor in Bengal before returning to Ayutthaya overland from Mergui.". 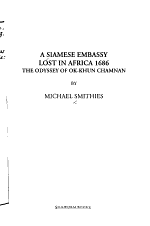 A Siamese Embassy Lost in Africa, 1686

Authors: Guy Tachard
Categories: Biography & Autobiography
"Ok-khun Chamnan, during his odyssey as part of the aborted embassy to Portugal, spent nearly a year in Goa, where he learnt Portuguese; a month travelling overland from Cape Agulhas, the southernmost tip of Africa, to the Cape of Good Hope; four months at the Dutch settlement at the Cape; six months in Batavia; and several months at sea on this journey. On his return to Siam in 1687 he was ordered to greet the French envoys La Loubere and Ceberet soon after their arrival." "The adventures of this Siamese khunnang did not end with his unsuccessful journey to Lisbon. He went on to Europe in 1688, visited the Riviera and Rome in winter, met the pope, and then in 1689 had an audience with Louis XIV. He converted to Catholicism and returned from Europe in 1690, disembarking at Balassor in Bengal before returning to Ayutthaya overland from Mergui.". 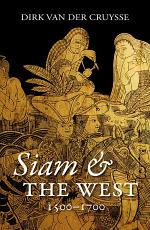 Authors: Dirk Van der Cruysse
Categories: History
Ambassadors from Versailles in wigs and lace mounted on elephants crossing rice fields... Siamese mandarins prostrate before the throne of Louis XIV... a Greek adventurer... a scheming French Jesuit­— these are just a few of the colourful characters that playa role in the early history of relations between Siam and the West. In a lively and engaging style, Professor Dirk Van der Cruysse traces the history of European-Siamese relations, from the arrival of the Portuguese around the beginning of the sixteenth century followed by the Dutch, the British, and the French. Explorers, merchants, missionaries, and ambassadors came and went across the oceans, sometimes producing vivid accounts of lengthy voyages, lavish courts, and strange customs. In these descriptions and anecdotes we observe the startling juxtaposition of fundamentally different worldviews arising from two distinct religious milieux. Van der Cruysse expertly weaves together material from journals,memoirs, and other archival documents, quoting from them extensively to construct a compelling historical account of a fascinating relationship. Originally published as Louis XIV et le Siam (Fayard, 1991), this English version has been ably translated by Michael Smithies, author of numerous books and articles on the French involvement in Siam during the seventeenth century. 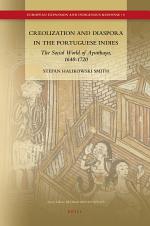 Creolization and Diaspora in the Portuguese Indies

Authors: Stefan Halikowski Smith
Categories: History
This book examines the sizeable Portuguese community in Ayutthaya, the chief river-state in Siam, during a period in which Portuguese power in the region declined. The analysis turns on the creolization and diaspora that affected this community, as well as problems with international trade, the Christian conversion process, and European rivalries. 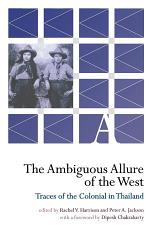 The Ambiguous Allure of the West

Authors: Rachel V. Harrison, Peter A. Jackson
Categories: History
The Ambiguous Allure of the West examines the impact of Western imperialism on Thai cultural development from the 1850s to the present and highlights the value of postcolonial analysis for studying the ambiguities, inventions, and accommodations with the West that continue to enrich Thai culture. Since the mid-nineteenth century, Thais have adopted and adapted aspects of Western culture and practice in an ongoing relationship that may be characterized as semicolonial. As they have done so, the notions of what constitutes "Thainess" have been inflected by Western influence in complex and ambiguous ways, producing nuanced, hybridized Thai identities.The Ambiguous Allure of the West brings together Thai and Western scholars of history, anthropology, film, and literary and cultural studies to analyze how the protean Thai self has been shaped by the traces of the colonial Western Other. Thus, the book draws the study of Siam/Thailand into the critical field of postcolonial theory, expanding the potential of Thai Studies to contribute to wider debates in the region and in the disciplines of cultural studies and critical theory. The chapters in this book present the first sustained dialogue between Thai cultural studies and postcolonial analysis.By clarifying the distinctive position of semicolonial societies such as Thailand in the Western-dominated world order, this book bridges and integrates studies of former colonies with studies of the Asian societies that retained their political independence while being economically and culturally subordinated to Euro-American power. 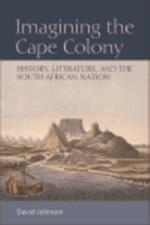 Authors: David Johnson
Categories: Literary Criticism
By returning to a pivotal moment in South African history - the Cape Colony in the period 1770-1830 - this book addresses current debates about nationalism, colonialism and neo-colonialism, and postcolonial/post-apartheid culture. 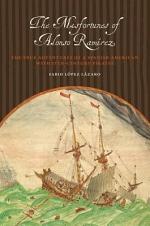 The Misfortunes of Alonso Ramírez

Authors: Fabio López Lázaro
Categories: History
In 1690, a dramatic account of piracy was published in Mexico City. The Misfortunes of Alonso Ramírez described the incredible adventures of a poor Spanish American carpenter who was taken captive by British pirates near the Philippines and forced to work for them for two years. After circumnavigating the world, he was freed and managed to return to Mexico, where the Spanish viceroy commissioned the well-known Mexican scholar Carlos de Sigüenza y Góngora to write down Ramírez's account as part of an imperial propaganda campaign against pirates. The Misfortunes of Alonso Ramírez has long been regarded as a work of fiction—in fact, as Latin America's first novel—but Fabio López Lázaro makes a convincing case that the book is a historical account of real events, albeit full of distortions and lies. Using contemporary published accounts, as well as newly discovered documents from Spanish, English, French, Portuguese, and Dutch archives, he proves that Ramírez voyaged with one of the most famous pirates of all time, William Dampier. López Lázaro's critical translation of The Misfortunes provides the only extensive Spanish eyewitness account of pirates during the period in world history (1650–1750) when they became key agents of the European powers jockeying for international political and economic dominance. An extensive introduction places The Misfortunes within the worldwide struggle that Spain, England, and Holland waged against the ambitious Louis XIV of France, which some historians consider to be the first world war. 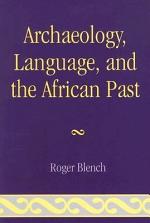 Archaeology, Language, and the African Past

Authors: R. Blench
Categories: Language Arts & Disciplines
Archaeology, Language, and the African Past is an overview of theories and methods, a fusion of African linguistics and archaeology. Roger Blench provides a comprehensive look at the history of all African language families, incorporating the latest linguistic classifications, current evidence from archaeology, genetic research, and recorded history. This original and definitive volume examines the economic culture of the continent-from major crops and plant life to animals and livestock-from a multi-dimensional perspective. It provides students of linguistics, archaeology, and anthropology with a critical discussion on the history of African languages and the cultures they articulate. 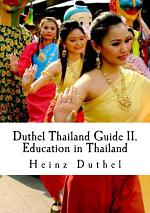 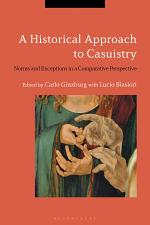 A Historical Approach to Casuistry

Authors: Carlo Ginzburg, Lucio Biasiori
Categories: History
Casuistry, the practice of resolving moral problems by applying a logical framework, has had a much larger historical presence before and since it was given a name in the Renaissance. The contributors to this volume examine a series of case studies to explain how different cultures and religions, past and present, have wrestled with morality's exceptions and margins and the norms with which they break. For example, to what extent have the Islamic and Judaic traditions allowed smoking tobacco or gambling? How did the Spanish colonization of America generate formal justifications for what it claimed? Where were the lines of transgression around food, money-lending, and sex in Ancient Greece and Rome? How have different systems dealt with suicide? Casuistry lives at the heart of such questions, in the tension between norms and exceptions, between what seems forbidden but is not. A Historical Approach to Casuistry does not only examine this tension, but re-frames casuistry as a global phenomenon that has informed ethical and religious traditions for millennia, and that continues to influence our lives today. 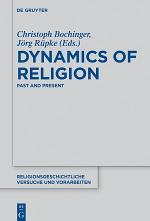 Authors: Christoph Bochinger, Jörg Rüpke
Categories: Religion
Religious ideas, practices, discourses, institutions, and social expressions are in constant flux. This volume addresses the internal and external dynamics, interactions between individuals, religious communities, and local as well as global society. The contributions concentrate on four areas: 1. Contemporary religion in the public sphere: The Tactics of (In)visibility among Religious Communities in Europe; Religion Intersecting De-nationalization and Re-nationalization in Post-Apartheid South Africa; 2. Religious transformations: Forms of Religious Communities in Global Society; Political Contributions of Ancestral Cosmologies and the Decolonization of Religious Beliefs; Esoteric Tradition as Poetic Invention; 3. Focus on the individual: Religion and Life Trajectories of Islamists; Angels, Animals and Religious Change in Antiquity and Today; Gaining Access to the Radically Unfamiliar in Today’s Religion; Religion between Individuals and Collectives; 4. Narrating religion: Entangled Knowledge Cultures and the Creation of Religions in Mongolia and Europe; Global Intellectual History and the Dynamics of Religion; On Representing Judaism. 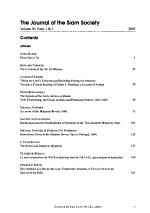 The Journal of the Siam Society 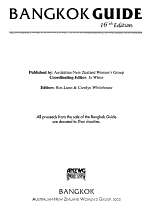